You are at:Home»What is Tornado Alley?

You may have heard about Tornado Alley in the news but if you want to learn more about it, you’re at the right place. Here we’re going to discuss some Tornado Alley facts, starting with the story of how this area got its name.

What is the Tornado Alley?

The term “Tornado Alley” was coined back in the fifties by two meteorologists, Robert C. Miller and Major Ernest J. Fawbush, who were employed by the U.S. Air Force to study the weather across the United States. In fact, “Tornado Alley” was the name of their study that was published in 1952.

Over the years, the term was used to describe the areas of the United States and Canada in which tornadoes occur frequently. As of 2018, there still isn’t an official definition of what this term describes, particularly because tornadoes can happen almost anywhere. Still, there’s a general consensus that this term should be used for the Great Plains area of the United States.

Where is Tornado Alley?

As mentioned before, tornadoes can occur almost anywhere on the planet. However, they’re more likely to happen in the United States than any other country in the world. In fact, there are about 1,200 tornadoes a year on average in the USA. Tornadoes are pretty unpredictable and have happened in every US state, but some states do get hit by them more frequently. The area with the most tornadoes stretches from the Gulf of Mexico to southern parts of Canada and is dubbed by the media as the Tornado Alley. 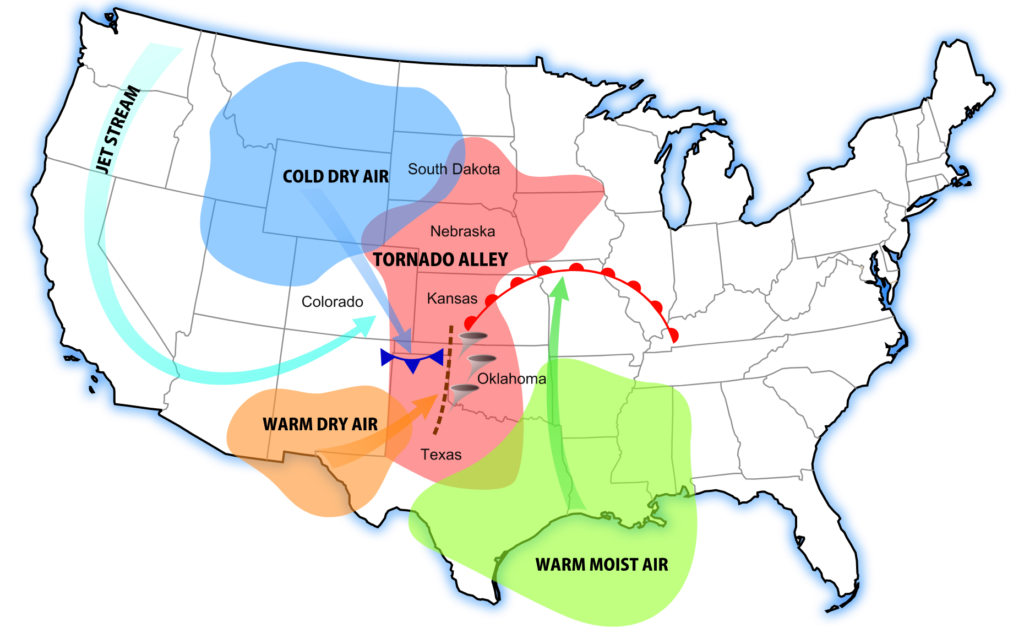 This part covers almost the entire region of the Great Plains, an area that plays a crucial part in the forming of tornadoes. Its flat surface allows the cold air from the North Pole and the hot air from the Gulf of Mexico to collide, creating tornadoes in the process.

Which States are in Tornado Alley?

The Great Plains of the United States are often thought of as the very core of Tornado Alley. The states belonging to this territory include the following:

Apart from the states in the Great Plains region, certain states form the other parts of the country are also sometimes considered to form part of the Tornado Alley. Some of those include Missouri in the South and Michigan and Minnesota in the North.
An interesting fact is that although Florida doesn’t belong to the same geographical region as the other states from the Tornado Alley area, the Sunshine State is the one with the highest number of tornadoes per 10,000 square miles in the whole of the US. It’s a similar case with other states from the Southern United States.

Florida might be the state with the most tornadoes occurring, but they’re usually not as violent as those that happen in the Tornado Alley. When it comes to F5 and EF5 rated tornadoes, the states that are topping the table are Alabama and Oklahoma, followed by Texas, Kansas, and Iowa.

Why is Tornado Alley so Prone to Tornadoes?

According to meteorologists, Tornado Alley is an ideal place on Earth for the formation of violent tornadoes. The reason why this part of the United States is so prone to tornadoes is actually pretty simple. The polar air masses from the north travel south across the Great Plains region, which is very flat, without any obstacles along the way. Once it reaches the Great Plains, the cold air collides with the warm air coming from the Gulf of Mexico. The results of the collision of two contrasting air masses are thunderstorms and, more often than not, super-cells.

When is Tornado Season in Tornado Alley?

If you take a look at the official meteorological statistics from the past, you will notice a certain pattern of tornado occurrence. Tornadoes commonly happen in the afternoon, usually between 4 and 8 pm. Most of them form during the so-called tornado season, which lasts from March to June. More than 75% of tornado occurrences in Tornado Alley happen during this time of the year.

However, there isn’t a single month of the year in which tornadoes haven’t been documented in the United States. In fact, a large number of tornadoes happening in the southern parts of the country happen in late fall. We are talking about the area commonly referred to as Dixie Alley, where 11% of tornadoes occur in November.

The Emergency of a New Tornado Alley – Dixie Alley

In the last couple of decades a high frequency of tornadoes has been reported is the Gulf Coast area. Stretching along the coastline of the Gulf of Mexico, this area covers 5 states, commonly referred to as the Gulf States – Florida, Alabama, Mississippi, Louisiana, and Texas. 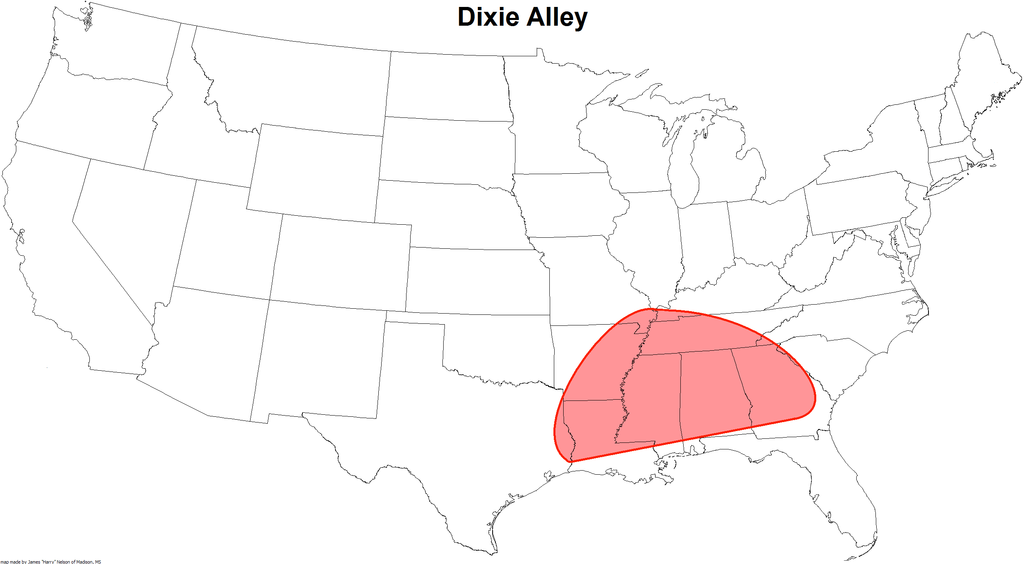 Among meteorologists, this area is better known as the Dixie Alley. This is the part of the United States in which tornadoes have been happening very frequently in the last two decades. For example, in the last year, this area was struck by more than 13,000 tornadoes, while there were only 328 tornadoes in the entire Tornado Alley.

Although tornadoes in Dixie Alley usually aren’t as violent as those occurring in the Midwest, they are known to cause a lot of damage. Actually, Dixie Alley tornadoes cause more than 600 million dollars’ worth of damage every year, killing over 40 people along the way. This is a much worse death toll than what tornadoes in Tornado Alley bring annually.

One of the reasons why this is the case is that the area of the Gulf States (Dixie Alley) is more densely populated than the vast areas comprising the Great Plains area (Tornado Alley). Apart from being the hotspot of tornadoes, the Gulf States are also frequently struck by violent hurricanes. In fact, the most destructive storm to hit the United States in the 20th century, Hurricane Katrina, had caused extreme damage in Dixie Alley.